Typically, the WizardLink Front-End connects to a Payload, Mass Memory Unit, Laser Communication Terminal or RF Transponders. This Front-End operates as a data source (transmit), data sink (receiver) or both at the same time.

The system consists of a 19″ 2U rack-mountable unit that is controlled and monitored by a software application that allows the system to be used stand-alone or controlled remotely via a Central-Check-Out System (CCS).

Providing up to four (4) WizardLink channels in parallel the Front-End interfaces directly to the unit under test (UUT) on one side using differential Voltage Mode Logic (VML) and exchanges user data on the other side using a 10Gbit TCP/IP streaming interface.

The Front-End enables the user to transmit or receive data (such as CCSDS Frames, Packets, etc.) to/from any source. Using a commercial server platform data recorded from the WizardLink channel(s) is offloaded using a standard 10Gbit TCP/IP interface and stored to disk and vice-versa. The commercial 10Gbit ethernet interface allows both copper or optical interfaces between the Front-End and the server platform. This allows the data to be transported over long distances (300 meters or longer) between front- and back-end.

In the second quarter of 2019, it is foreseen to support the SpaceFibre protocol (compliant to ECSS-E-ST-50-11C).

The WizardLink Front-End is the third generation of WizardLink EGSE released in Q4 2018, since the release of the first generation in 2009. Previous generations have been used one wide range of programs (ESA and non-ESA), such as Sentinel-1 and various commercial programs and delivered to major European prime contractors such as Airbus and Thales Alenia Space. 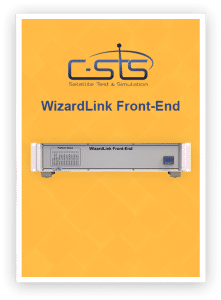