The MPIP typically is connected directly to the spacecraft sub-system via the harness and is used to test and/or simulate various electrical and data interfaces of the flight sub-systems e.g. On-Board Computers (OBC), Power Conditioning units (PCDU), Instrument Control Units (ICU) and any other payload or platform elements.

The MPIP product is a rack-mount or tabletop 19” unit which supports up to 16 interface modules fitted in the backplane. Each module represents dedicated electrical interface types (power, discrete, TM/TC, etc.) and is designed in a 3U Eurocard size form factor. Each MPIP mainframe is equipped with controller module (MCM) which is the control and status gateway between the MPIP interface modules and the operator (i.e. GUI running on a User Workstation). In addition, MCM module includes isolated interface circuitry for medium data rate applications (up to 800Mbps). Hence the MCM can also act as an interface module providing for example, standard and custom RS422/RS485/LVDS interfaces as well as SpaceWire, SERDES and Parallel/Serial LVDS.

Modularity of MPIP allows to combine a large variety of different interface types into a single platform and scale it up or down.  A fully populated MPIP unit can provide over 400 ECSS compliant electrical interfaces. For small systems, the interface modules can be mounted horizontally in such case providing a total of up to 6 slots within a 2U height.

The MPIP Controller Module can be expanded with up to two (2) extension boards. These provide various interface types, such a SpaceWire, SERDES and Parallel LVDS and custom implemented. Science data as transmitted or received via the interfaces are exchanged with the back-end via a dedicated 1Gbit ethernet port using in hardware implemented TCP/IP.

The MPIP is a next generation power and discrete product line which has been designed by leveraging almost 20 years of experience in VME based GMFE / DSTE product line, which have been deployed for many EGSE systems since 1997.

MPIP has been successfully deployed in missions since 2021 namely: TRISHNA, Galileo Second Generation, ROSE-L and many more. 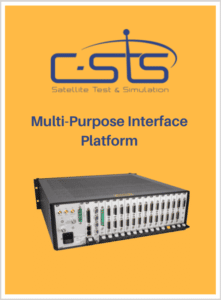 Support
Offline
Start a chat!
We will be back in 0:47