About CANopen / CAN bus

The CANopen or CAN bus Front End is an EGSE unit to control, monitor and simulate flight equipment on the satellite onboard data handling bus, during the spacecraft development, assembly, integration and test (AIT) phases.

In a typical application, the CAN bus Front End is used as CANopen Master to test one (or multiple) Slave node(s), by simulating the spacecraft specific CAN protocol, including TM/TC transfer mechanisms.
With a different software configuration, the same hardware can be used to simulate CANopen Slave nodes.

An optional CAN interface card can be added to provide a fully independent CAN Bus Monitor (BM) with sophisticated filter, archiving and export functions to analyze the (redundant) spacecraft CAN bus.

The system consists of a 19” 2U hardware platform that is connected to the C-STS Control and Monitoring Software (CMS). The system can be used as desktop connected with a standard PC or integrated into a 19″ rack.

The CAN bus Front-End operates as the electrical interface (through opto-couplers) towards flight equipment and provides data extraction, protocol handling and status annotation functions. The unit itself is powered from an external AC/DC adaptor.

As a CANopen Master the CAN bus Front-End implements a periodic, deterministic CANopen message scheduler supporting synchronous and asynchronous data transfers. The Master node operations are based on an Object Dictionary that is imported from a Device Configuration File (DCF). Standard CANopen functions include; NMT Master, SYNC producer, Heartbeat protocol, SDO and PDO management (including project specific SDO Block Up- and Down-load), SCET distribution (as described in ECSS-E-ST-50-15C), Bus A/B switching as well as ABORT code handling and reporting.

The CANopen Slave node function of the CAN bus Front-End uses a dedicated, dual redundant channel to simulate one (or multiple) slave nodes, each with a unique node ID. The operation of simulated node(s) is based on a Device Configuration File (DCF) that describes the behaviour for each Slave independently. Standard CANopen functions include; NMT operation, SYNC consumer, Heartbeat protocol, PDO management and SDO services.

The fully independent, Bus Monitor (BM) is controlled through dedicated software that enables the user to monitor the traffic (including time-stamps) on a redundant CAN bus. Sophisticated filters can be applied to trigger on (and capture) specific bus conditions. Near real-time data analysis can be performed, while continuous storing all CAN traffic to disk in parallel. Off-line data analysis of previously recorded sessions can be performed with the same GUI. The Bus Monitor function includes; data export to various output formats, user definable textual decodes and colour schemes (simplifying CANopen data analysis).

C-STS have delivered CAN systems since 2008 to European prime contractors such as AIRBUS and THALES and various scientific payload/instrument teams to support various ESA spacecraft missions including Sentinel-1 and ExoMars (2016 and 2020). 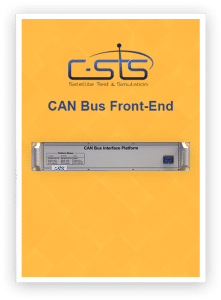